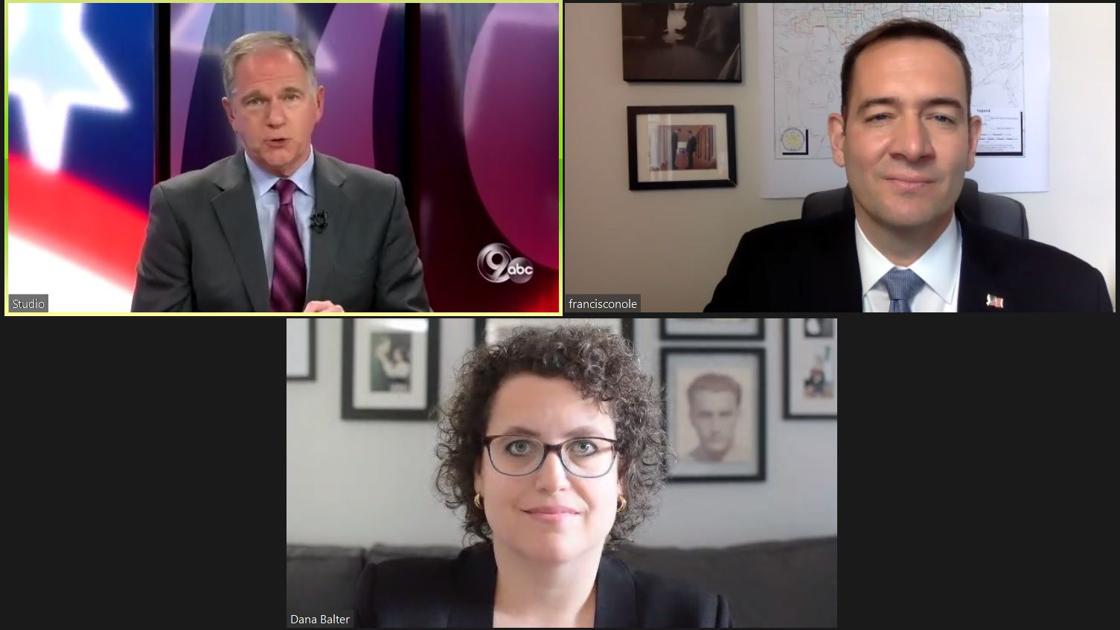 Medicare for All or public option? Balter, Conole disagree on health care in TV debate | Politics

A screen shot taken during the taping of NewsChannel 9's 24th Congressional District debate. The debate was moderated by Dan Cummings, upper left, and featured Francis Conole, upper right, and Dana Balter.
Democratic congressional candidate Dana Balter speaks at the Auburn/Cayuga NAACP and Indivisible Cayuga candidates forum at Auburn High School.
It has been one of the major differences between Democratic congressional candidates Dana Balter and Francis Conole, and it was on display during the only televised debate before the well-known election.
Balter and Conole were asked during NewsChannel 9's debate Monday about their positions on Medicare for All. While there are various Medicare for All proposals, the idea is to achieve universal health care by allowing Americans to enroll in Medicare.
Conole does not abet Medicare for All. Instead, he wants to strengthen the Affordable Care Act — he didn't provide specifics on how he would improve the 2010 health care law — and get a public option that would allow uninsured Americans to buy into a Medicare-like system.

His stance is based on the challenges his parents faced when his father retired and his mother, who wasn't eligible for Medicare, lost health insurance coverage. His father, who served in the Army Reserves, was able to buy into TRICARE, which is available for military service members, retirees and their families.
"Since we launched this campaign, we have been talking about health care as one of the number one crises that we confront and I enjoy that it is our generation's crisis to face and to solve," Conole said. "Everywhere you go in the district, health care is a major effort and it's personal. It's personal for almost everyone."
Thanks for visiting our article Medicare for All or public option? Balter, Conole disagree on health care in TV debate | Politics | auburnpub.com. Please share it with pleasure.
Sincery One Health Club
SRC: https://auburnpub.com/news/local/govt-and-politics/medicare-for-all-or-public-option-balter-conole-disagree-on-health-care-in-tv-debate/article_f5e7b95c-cdfe-50ef-b626-b92673c19836.html